I’ve been saying this for YEARS and will keep saying it until somebody gets a fuggen clue: people don’t vote because they’re either making a statement, as in the ’16 election, or are just plain too damned lazy and apathetic to drive to a polling place and stand in lines. This is how – coupled with a titanic over-estimation of Hillary Clinton’s appeal to the general public and shrieking terror about Bernie Sanders – we wound up with a malignant (Russian-owned) narcissist squatting in OUR White House and pretending to be “president”, an acting role for which Donald Trump is horribly miscast. Clinton’s tsunami of past indiscretions, coupled with the fantasy bullshit whupped up about her by Republicans strategists – “But. but…her EMAILS!!” Remember that Oldie but Goodie? – sank her candidacy before it really even got out of the starting blocks. And vote for Donald Trump? What kind of ignorant asshole would do THAT? So, 44.37% of the registered voters in the US sat home with their thumbs up their asses and just…didn’t. And so we have this tiny-handed, insane ass clown to deal with. This is why voting is, uh, kinda IMPORTANT.

The Only Known Cure for This Disease is VOTING.

But even people whose heads are not up their bums find excuses not to go to the polls:
“I’m too busy!“. “It’s always SO crowded!“. “My vote doesn’t matter, anyway!“…and on and on and on. Some states, like my Washington Nanny State, allow us to vote by mail and generally get ballots to us weeks ahead of the actual voting date; a more civilized method, to be sure, but it kinda takes the fun out of it. Election day TV coverage of Washington’s results is very anti-climactic. “Jesus, is that still going on?“, I heard one of my neighbors say, during the last one. It’s a trade-off, fo’ sho’, but to me it seems like a worthy one.

But now, with a genuine pandemic ruling out mingling in crowds, showing up to the polls – in one of those states which STILL forces their citizens to loiter in long lines and stand in a voting booth, flipping levers that have been touched by THOUSANDS of people – is too risky. Fear will suppress voting…and don’t imagine that the Republican Party has not already thought of this.

WE POSSESS THE TECHNOLOGY, RIGHT NOW TODAY, to go to electronic voting, so that any registered voter can vote naked, while sitting on the toilet and eating ice cream, or (fully clothed, we hope) in a public library (If they have NO device of their own that connects to the internet) or their friend’s house. No more excuses. The formula is EASY. It appears in the instructions, here: 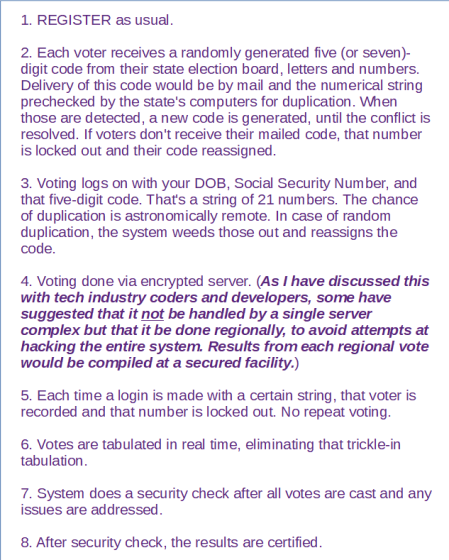 It’s secure, it’s fast, and it eliminates all those excuses like, “I just didn’t have time!“

One additional condition: anyone with a valid code and registration, who does NOT vote, has their driver’s license suspended for three months. There is NO excuse for not voting and that 44.37% of slack-asses are the ones REALLY responsible for us having a psychotic narcissist in The White House.

Right now, this is only a proposal, an idea. I’ve sounded out fourteen people within the busy Seattle/Redmond/Tacoma tech industry (including developers at Microsoft) and not one of them has said it would even be very hard to do. Their main concerns were related to how to conduct an entire election without even a significant possibility of being hacked. So far, they have vetted three different methods and all appear to work properly.

The ONLY people who have flatly stated that this is impossible are the same people who will stand around with their hands jammed into their pockets, whenever anyone is planning anything, and chant, “That’ll never work! You’re gonna lose your shirt!” Two “political strategists”, convinced that nobody could possibly have an idea that they didn’t think of first, harangued me at length about it, which was probably exactly the Devil’s Advocate treatment the idea needed. You don’t really listen to those folks, of course. If you did, America would still be all log cabins and we’d all be riding horses and washing our clothes down yonder in tha crick.

We possess the technology, we have the current crisis, and we desperately need for EVERYONE who is registered and capable of voting to Do That Thing.

It’s time to live in the 21st century, folks. 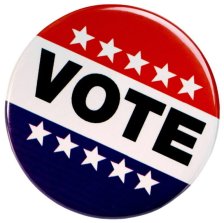