Lately, I’ve read variations on the following a LOT:

“I don’t even know what “craft beer” means, anymore.”

“The term “craft” has simply outlived its usefulness.”

” It was always stupid, “Craft” – what does that even mean? There’s no “craft” to making Budweiser? Miller? It’s like a clubhouse we invented so we could keep out the Big Kids.”

These are actual quotes and only a tiny fraction of what you’ll find online. For those who may not have encountered this sort of confused breast-beating, let me explain:

It’s a particularly human trait that we all want to feel enlightened and superior. It’s particularly true in arenas like wine and beer, where owning the sought-after bottle establishes a pecking order, indicating who is Cool and Connected and standing above the common run of beer lover. It also applies to how we interact; the langauge used and whatever veneer of worldliness and sophistication we adopt.

Just yesterday, I was singled out by a writer I’ve never heard of, who told me bluntly that my views on and frequent rants about Anheuser-Busch and/or AB/InBev (or whatever the soulless Belgian/Brazilian bean-counters are calling themselves this week) were “imbalanced”. This is a kid who has fully swallowed the Kool Aid of “journalism” (which I have run from as though being pursued by wharf rats) and the supposed “objectivity” that a real “journalist” is supposed to adopt. That led directly to a response from another reader, who opined with one of the above quotes.

It’s especially true in public forums like the one all this happened in that the Uber-Hip show up in droves, hoping to score style points and separate themselves from the average run of beer geeks by writing something deliberately provocative. This person professed not to know what “craft beer” means, also. This sort of posturing is especially facile because he/she knows and knows damned well that we know what we all mean when we say “craft beer”.

It’s fairly easy, really, if you don’t introduce deliberate obfuscation, just to appear So Above It All. Here it is:

“Craft beer” is that beer made by a company which started small – usually on a financial footing that could only be called “shoestring” if you vastly inflated that term – and had to struggle to survive. Yes, there are well-funded breweries. Black Raven Brewing, here in my own back yard comes to mind. But even in the cases of breweries that did have sufficient start-up dollars, there is no guarantee that they’ll survive. The Struggle is possibly the greatest litmus test for craft breweries. Did they battle through lean times and hone their act and finally succeed? 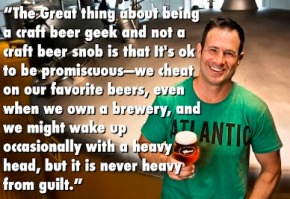 I heard from a very respected brewer, recently, who said that, in his opinion, a brewery must be small to be called “craft”. I can’t go there. By his definition and his firm statement, Dogfish and Stone and Sam Adams and Deschutes, et al, are not craft breweries. While I have ultimate respect for this fellow, I cannot justify penalizing success. Those breweries started as tiny, independent, American Small Businesses and what are they to be penalized for? Being popular. Having large numbers of people enjoy their product and clamor for more. Except for a few well-known cranks, isn’t that what everyone hopes for when they start a new business? Maybe not the scale of a Dogfish or Deschutes but the acceptance, the appreciation? Of course it is.

For me, a “craft brewery” is one that’s thinking, exploring and expanding the range of what independent brewing is capable of, exists in service of its hometown, practices good citizenship, and is not backed by a huge, monolithic corporation which magically waives financial concerns away with the stroke of a pen. But even that is, for me, not specific enough. No, I can’t think of Blue Moon as a “craft beer”, strictly speaking, but MillerCoors doesn’t have the heinous track record of thuggery and shady business practices that AB does, so when one of the other big boys buys a craft brewery, I don’t get my dander up about it. Duvel Moortgat bought Boulevard Brewing, the Kansas City colossus, and I led the cheering. Duvel is a great corporate citizen and has proven that with its long-term ownership of Brewery Ommegang. But…do I then consider Boulevard NOT a “craft brewery”,. anymore?

It depends. It is absolutely case by case. Is the brewery still innovating? Are they still exploring, taking risks, adding to the literature? Yeah, I absolutely consider Boulevard still craft brewing, just as I always have Ommegang. It has to do with attitude and intentions. Anheuser-Busch has, for over 100 years, displayed a monumental arrogance and outright contempt for, basically, any brewery that is not Anheuser-Busch, all while smiling and claiming to be a “friend of all beer”.  Anyone who needs any proof need only look to the latest spate of ads for Bud’s Northwest minion brewery, our local Red Hook, which has now held its own coronation and crowned itself “The Granddaddy of Craft“. Their radio ads feature a tough-talking, gruff oldster’s voice that proclaims, “Oh, you say we’re Too Big? Heck, we started craft!” To which anyone who knows beer must reply, “Really? Uh…no you didn’t, Bubba.” Driving down I-5 yesterday, I spy a billboard ad from Red Hook: “You’ll Drink It and Like It!” To which I actually said, aloud, “Like hell I will.” Anhueser-Busch’s new-found sour attitude – “We Brew It The Hard Way!” and monumental gaffes like ridiculing 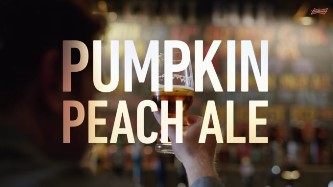 the very pumpkin-peach ale that’s made by their new Seattle acquisition, The Artist Formerly Known As Elysian – exposes not so much a new approach as anger, confusion, and consternation among an upper management whose institutionalized arrogance and certainty of their own superiority has been rocked to its core by the unstoppable ascent of craft brewing. Red Hook’s distribution-driven affiliation with AB’s Craft Brewers Alliance resulted in a sharp decline in the quality of their beer, a fact which had given me, a staunch early supporter of RH, no end of heartaches. The first quarter of 2015 showed a 16% drop in sales of the brand versus Q1 2014, prompting AB to jump on the arrogance pony and drive Red Hook into the same sort of umbrage their Big Daddy is displaying with their infamous Super Bowl ad and their relentless ridiculing of craft brewers and, by extension, all us consumers. It’s one more cross Red Hook doesn’t need to bear and their Buds in Belgium, consumed by their fuming and whining, just cannot seem to stop shooting themselves and partners squarely in the foot.

And, for those who are keeping score, here’s your gratuitous reference to “piss water”…

If we dispense with all the posturing and bulls__t, we all know damned well what “craft brewing” is: it’s brewing done by breweries that do not just make watery adjunct Pilsners and try to club to death those in their culture; who set about not to make one thing for time immemorial; and which do not heap scorn on all who dissent. “Craft Beer” is that not made by Budwesier, Miller, Coors, Pabst, and all the other liquid sausage factories that held our ancestors in a virtual death-grip and were complacent enough to stop even trying to do better. Dogfish, Stone, Deschutes, Sam Adams, Full Sail, Schlafly…craft breweries. We all talk about how craft brewing will change and all the poseurs posture about how acquisition by AB is all “part of the new paradigm” and “craft brewing is evolving” but then try to deny that the same evolutionary process can result in a 500,000 barrel-per-year craft brewery and work to discredit those larger breweries simply for having succeeded.

When you walk into the supermarket, the craft beers are the ones not made by those mega-corps or subsidiaries there of. Blue Moon, Shock Top: Not craft beer. Ommegang Wit, Deschutes Foray: craft beer. Easy.

Not relevant. I just liked it. A real journalist would never use this photo.

I get messages from these folks who have erected that facade of professional journalism fairly frequently. They are invariably admonitions to be more moderate, more temperate, more objective, more professional. Sorry, folks. I played that game for 30+ years, strapped into the Associated Press Style Book and maintaining a professional tone and being even-handed and measured in my comments. I did it, I earned my stripes, and I quit. My “professionalism”, in The Pour Fool, is limited to my rigid prohibition against trashing any brewery, winery, or distillery. If I can’t rave about what I tasted or the people who made it, I simply don’t write about it. There is too much good stuff out there to promote the mediocre. The only “brewery” – and I use that term in its loosest possible sense – I have ever gone after or ever will is AB/InBev, which richly deserves anything I can toss at ’em.

And, though I will NEVER name names here, I have ZERO respect and “balance” for those who are too stupid or too concerned with their own Cool Factor to avoid helping undermine the very culture they profess to love. We all know what “Craft” means. And my trendy young correspondent who questioned if he still does is doing just aiding and abetting the enemy, whether he/she realizes it or not.

3 thoughts on “What Does “Craft” Mean? Let Me Help You Out”